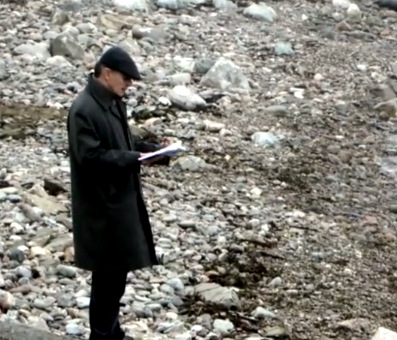 Filmmaker Susan Kemp’s portrait of Robert Allan Jamieson, Shetland novelist and poet. Filmed over a period of weeks in the remote West Shetland crofting township of Sandness where Jamieson grew up, the film is a lyrical and inimate insight inro the author’s youth and particular experience in living and leaving such a close community.

Susan Kemp’s film is based on his collection of poems ‘Nort Atlantik Drift’, described by Jamieson as originally intended ‘for my three sons, a record of who their father might be and who he once thought he might be. But as with life, the narrative developed in ways I didn’t foresee’.

The same could be said of the film as less than a week before filming began Alan’s father died at the age of eighty-four – as with life, the narrative of the film developed in ways Alan could not have foreseen.

Writerstories.tv meets Alan at the first Shetland showing of the film in Sandness on Friday 29th August as part of Screeplay, Shetlands Film Festival