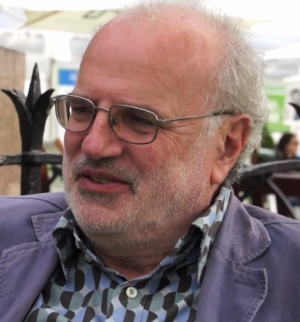 Jess Johannesson Gaitan talks to writer Michael Jacobs about his new book The Robber of Memories, at the Edinburgh International Book Festival 2013.

In 2011, Michael Jacobs travelled all the way up the Magdalena to its source high up in Andean moorlands controlled by guerrillas. He charts the dangers he negotiated – including a terrifying three day encounter with the FARC – while uncovering the river’s history of pioneering explorations, environmental decline and political violence.

As Jacobs delves into the history of destruction and decay along the river, he also makes a deeply personal exploration into memory and its loss: not far from the river’s banks lies a group of townships with the highest incidence of early onset Alzheimer’s in the world. Jacobs reflects on the lives of his father, and his mother – sufferers respectively from Alzheimer’s and dementia – as he travels upstream towards what comes to seem like a heartland of mystery, magic and darkness.

Michael Jacobs was born in Italy and studied art history in London and the US. He is the author of several travel books and was shortlisted for the 2004 Thomas Cook Travel Book Prize. He lives in Spain and London.